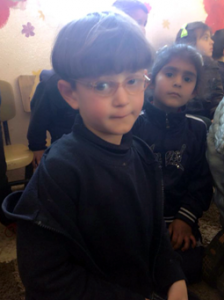 “I want to be a teacher. I love school, learning many new things, and teaching”. Here is Mohammad Rizeq, a 5 year old boy at the Hope Flowers Kindergarten.

When he first came to the kindergarten, he was very aggressive and Abeer, his teacher, noticed also that he had problems with his eyesight. The poverty of his family situation was reflected in his torn clothing and the fact that he never brought food for lunch. His parents had a hard time keeping up with the troubles of daily life, and at home Mohammad did not get the attention he needed.

Mohammad used to escape from the Kindergarten to the house of his grandparents, which is just next to the kindergarten. “I love my grandmother, she loves me and I love her the most. She gives me food, and allows me to play”, Mohammad said.

Mohammad’s eye was injured the year before, and he needed to wear glasses. The parents did not want to afford that. His bad eyesight made Mohammad more insecure and added to his problematic behaviour. Teachers and social workers from Hope Flowers initiated several meetings with Mohammad’s parents to discuss the situation and support them in bringing about changes. One year later, things have improved – Mohammad now has glasses, regularly brings food and his clothes look much better, too.

But most importantly, his aggression and unease have subsided and he feels a lot better. No wonder he, too, wants to be a teacher now.

Friends of Hope Flowers
Our website uses cookies - it works best if you allow them, but you can (even selectively) switch them off. OK Selective No Read more
About cookies

This website uses cookies to improve your experience while you navigate through the website. Out of these cookies, the cookies that are categorized as necessary are stored on your browser as they are as essential for the working of basic functionalities of the website. We also use third-party cookies that help us analyze and understand how you use this website. These cookies will be stored in your browser only with your consent. You have the option to opt-out of these cookies. Opting out for 'preference' cookies may have an effect on your browsing experience, as these are used to accommodate your language preferences.
Necessary Always Enabled
These cookies are necessary to make the website work.
Preferences
These cookies store your preferences.
Statistics
These cookies enable analyis of website traffic, without storing user-identifiable data.
Advertisement
These cookies help in analyzing the results of advertisements and ad campaigns.
Save & Accept